Krystle likes to make fun of me. I’ve provided her with plenty of fodder over the years, but recently she likes to make fun of me because she has convinced herself that I want my next home to be one of those monolithic dome houses. Super energy efficient, maybe half built into the side of a hill, water cisterns off one side of the house, a big ass compost pile off the other side, solar panels all over the damn place. And, per usual, she’s right. (Nobody tell her I said that.) Truth is, the joke is on her. We already DO live in a place like that! Minus the dome.

I’m somewhat of an introvert so no one will blame you if you didn’t already know that I have a lot of emotions. But you’re in the inner circle now so tread lightly, okay? One thing that gets me feeling all the feels is the level of energy independence we’ve managed to achieve on Small World. Lately I’ve been thinking about how much I wish more people could have the experience that Krystle and I have had over the last few years weaning ourselves off fossil fuels. I want people to know that it isn’t futuristic science fiction stuff. This shit is possible. We are proof! 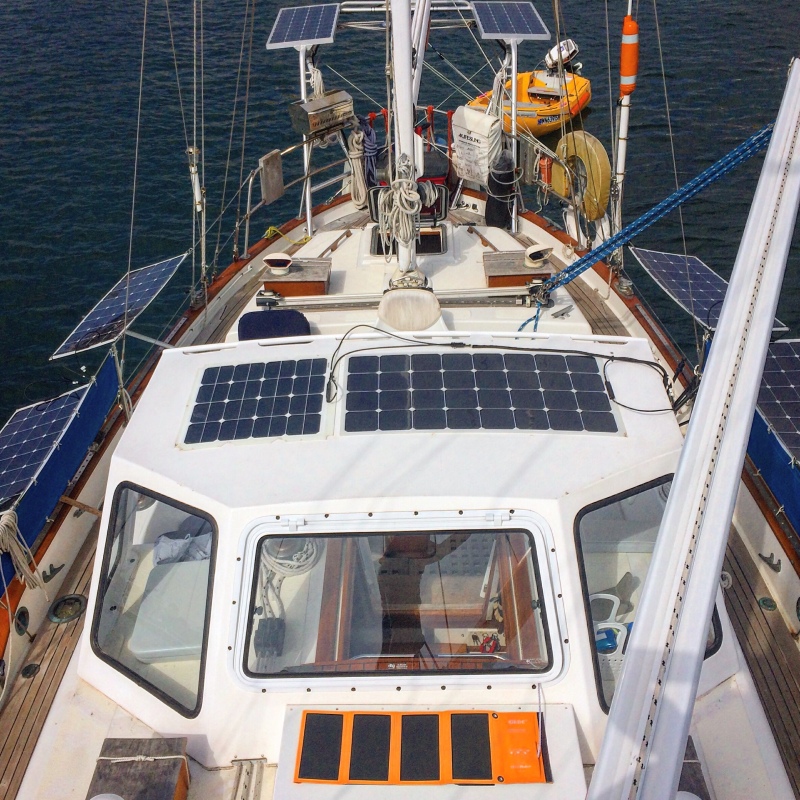 Our small steps turned into 750 watts of solar panels.

Are we 100% renewable? Nope. Our diesel engine would probably revolt if I claimed such a thing. (Please, keep purring sweet Percy!) We are Fossil Fuel Free-ish. When the wind won’t move our 32,000 pound home we rely on diesel fuel to do some serious work. But in the not too distant past Small World needed to burn fuel just sitting at anchor. Running the engine was the only way to charge the battery bank which powers things like our lights, refrigerator, VHF radio, computers, power tools, and blender (hello margaritas!!). We had some solar power on the boat when we bought her, but it wasn’t enough if we wanted to stop using the engine as a generator.

When we evaluated our energy system, we saw where we couldn’t make a difference (engine power) and we saw where we could (daily electrical needs). Then we did something about the latter. It started with me following Krystle around the boat and turning off all the lights that she loves to leave on. Over the years we changed older incandescent lights to LED (so I could relax a bit), we replaced old batteries with new highly efficient ones, and we’re always working to make the fridge draw less energy. While in Southern California we added more solar panels and upgraded the controllers to finally get the system dialed in to work for our home, our life, and our sunny region of the world. 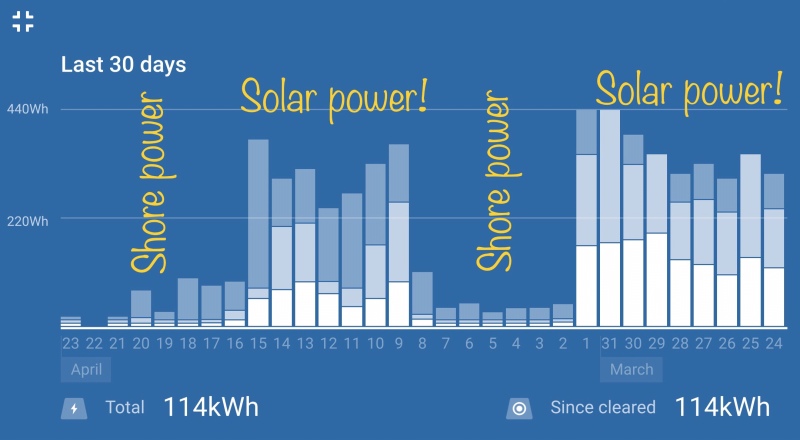 When we aren’t tied to a dock our solar panels create all the energy we need.

Do I think our model of energy independence would work for everyone? Does the Pope shit in the woods? Sometimes? Doubtful? Unclear at best? Perfecting the system on Small World has taken a lot of time and a lot of futzing on our part. Don’t let the time needed be daunting or intimidating. Start with something small and see how it works, or how it doesn’t work. Make changes. Get addicted to seeing your electricity bill decline. That’s all we did. There was no master plan at the outset.

Call me the son of an engineer, but what could be more exciting than watching our battery bank get topped off every day, FOR FREE, by solar power? Bill Nye is actively losing his shit while America denies that renewables can power the country, meanwhile Small World is out here doing it. That makes me sick to my stomach and so happy all at once.

Share in our success and join the movement to be Fossil Fuel Free-ish. Take small steps today, be amazed where you are tomorrow. Only you can prevent climate change. (Do I have a future in tag lines or what?!)

P.P.S. Don’t let the water run unnecessarily. It’s literally the small steps. Just pretend like it’s the end times and really ask yourself how much water you need to waste while washing dishes/brushing teeth/showering/etc.

P.P.P.S. This was difficult for me to write. I’m really passionate about this and I’m trying to write a manifesto within a few paragraphs on a travel blog. But if you ever need help with removing fossil fuels from your life, I’m your guy.

Remember Where You Came From