The title of this post is not meant to be sarcastic. I will elaborate on the reality of that statement in a moment, but I would first like to share with you some alternative titles that were considered for this entry: “The Wizard of Ew”; “The Lion, the Witch, and the Where’s-that-smell-coming-from”; “The Great Gaspy”; “Close Encounters of the Turd Kind”.

“I’d guess it’s not much bigger than 10-12 gallons”. That was the estimate of the size of the holding tank that held the “waste” that was pumped out of the toilet in the aft head. Twelve gallons. Most toilets on land use about 1.5 gallons per flush. You do the math and you will see our problem. We could only use the head for a few glorious times before having to drive our house to a pump-out station or resort to taking a hike to the shore toilets. And since our engine was no longer a machine of propulsion but instead an arts and crafts project (details on that predicament in a future post) we’d had to resort to calling up, and paying, someone to empty our holding tank into a floating, motorized cesspool complete with a vacuum hose and a couple of very, very brave men. To cut down on unnecessary tank pumping we made the rule that the head was only for Number 1. I repeat, we have never used the toilet on the boat for Number 2. (In case that’s not clear enough I will say it this way. Never did we ever poop on the boat.) As for the forward head, the absence of a holding tank all together had made that toilet entirely unusable. The need for Dave “The Head Guy” was all too pressing.

The Wizard of Ew

My breakfast on the morning of Day 1 of the head refit was one that was easily digestible and that was a good thing for me and for Dave. Nurses are known for their ability to converse about gruesome things all while sucking down a beer with their post-nightshift breakfast of hash browns and eggs (if you’ve never tried beer with breakfast you are seriously missing out). I proudly include myself among the mouth breathers that are able to overcome their gag reflex to help wrap a gross wound, clean a poopy bum, or brush the teeth of a fellow with meth mouth. But the process of ripping out the old hoses of the sanitation system was almost my limit.

The smell of ammonia filled the air with the first snip of the unnecessarily complicated network of hoses, fittings, pumps, and valves that encompassed the sanitation system of the aft head. I’d like to clarify the intensity of this smell. If you are feeling particularly adventurous, or if you are looking for new and exciting ways to get high from feeling really light headed- and who isn’t these days- then here’s what you do. Empty a bottle of extra strength ammonia into a bucket and place it in a small closet. When you are good and ready walk into the closet, close the door, and breathe. The deeper the breath the better! Notice the burn in your nostrils, the dryness in the back of your throat, the tunnel vision? Isn’t it great?!

Occasionally the moans and groans that are entirely necessary in order to contort ones body into the awkward positions required for boat work would give way to an exclamation. A “Woooooow.” Or a “Would you look at that?” There was even the need for “Oh boy…” It was always one of these comments that preceded some horrific sight. The inside of the old sanitation hose and the amount of poo, salt water deposits, and god knows what else that had clogged it almost to the point of failure. The back of 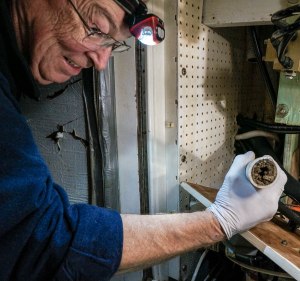 When you think YOUR job is the worst…

the bulkhead that had been covered by sewage due to a clogged valve. The amount of dried, crusty “particulates” that were left over in the engine room after the demolition had been completed. And no matter what the sight my response was always the same: “That’s not my shit. Literally.” (But you have you read the word “literally” with a British accent, because it’s obviously better that way. I thought about writing it as “litrally” to help emphasize the accent, but I wanted to make sure you know that I can spell. Because I can. Obviously. Litrally.)

Holding true to my desire to be an apprentice of the professionals that we hire to work on the boat I had stuck around all day to participate in the dismantling of the old system. Sometime in the late afternoon Dave looked up from one of the disgusting tasks that we had hired him to do and stated, “I’m surprised you’re still here. Most owners have long since fled the scene.” I took that as the biggest compliment I could receive. Almost like it was a badge that had been earned. My very own “Brown Badge of Courage”.