To the southeast of Santa Barbara, there is a national park known as the Channel Islands. If you’re looking to do some learning, there is plenty to research about these islands. The oldest known human remains found within North America were found on one of these islands. Cooler yet, these isolated landmasses became home to pygmy mammoths. You read that right and I assume your indignation matches mine. I felt robbed after reading that informational pamphlet! Not only did I miss out on seeing wooly mammoths, I missed the mini version, too?! I can’t even right now. I don’t know who to blame for this injustice, but I have a feeling it was Trump’s fault. #ThanksTrump – am I doing this right?

Our sail to Santa Cruz Island was an anomaly – a beam reach the whole way and we didn’t have to tack once. For those of you who aren’t sailors, this NEVER happens. As much as any of us like to sail, we also like to get to our destination in a reasonable amount of time. Anyone who tells me it’s all about the journey and not the destination is going to get an envelope filled with glitter sent to them. Because the journey already took over 5 hours to go about 25 miles. Based on my highly-advanced calculations, that’s worse than California or Seattle traffic – even on game days when Obama is in town. And yes, sailing is usually more enjoyable than sitting in a car pumping the breaks on I5 but after a few hours I’m generally ready to just be there already with a glass of wine in hand.

Smuggler’s Cove is another anchorage that doesn’t offer up tons of protection, but with winds out of the NW, we thought it would be just the right kind of protection. I suppose you could say that we were mostly right. The island did provide crucial protection from the swell that had likely built up from the wind. Usually that means a comfy ride, but the wind was incredibly high for most of our time there. After a few days, we were at a point where we would be happy to motor to our next waypoint without a breath of wind, just to have a break from it. Our anemometer isn’t working at the moment (a moment which has basically lasted for the last 4 years since it was installed new) but the weather report said there were winds around 25knots with gusts of 37knots. There were whitecaps on waves coming away from the beach! Thankfully the sun was out or I would probably have been curled up in bed assuming I was about to die.

On the first night in Smuggler’s Cove, we noticed that the other sailboat in the harbor appeared to be dragging anchor, but that the folks aboard were addressing it. After a while it seemed like they might be having issues with their windlass or their ground tackle. We started to worry about them as the sun made its decent. What if they needed help? Any options for offering assistance would be easier with daylight.

We weren’t getting through. Craig got out our giant 3-million-lumen flashlight and started to shine it at them.

Success! It was only a brief conversation, but the folks aboard Liberty were just fine and we were just the nosey neighbors. (For the record, they said it was nice that we hailed them to check on them.) But I remember when Craig and I had trouble setting the anchor the first time we went out and we were extremely grateful to have been cruising with friends and able to raft up. I would’ve felt supes shitty if we had just continued making our delicious dinner and they were in need of a friend.

If a situation is happening and I am not sure if I should try to help or call the Coast Guard, I’ll ask myself, “What if it was me?” I may not be able to be the person who saves a life, but I can easily make a radio call. And that’s what we did on our second night in Smuggler’s Cove.

C: US Coast Guard, this is Small World

USCG: Small World, this is US Coast Guard Sector Los Angeles, go ahead.

C: I am calling to report a sighting of a red flare in the vicinity of Smuggler’s Cove on Santa Cruz Island.

Flares are a Big Fucking Deal. You are legally required to carry at least 3 on your vessel for emergency purposes. Shooting one off is serious because everyone knows that it’s a signal that implies you are not able to help yourself and that you may not even be able to call for help. Reporting one feels pretty fucking serious, too.

The USCG asked us all the questions to help isolate where the flare may have been sent from. There are lots of calculations to help narrow the search field. What was the bearing to the flare? How many seconds was it rising? And falling? If you hold your fist out (thumb up) and put it on the horizon, how high did the flare go? How high were you off the surface of the water when you saw the flare? On and on. As we were answering the questions, we saw the smoke from another flare in the exact same location. My adrenaline has never spiked so high while being seated indoors.

The dispatched helicopter circled our boat to match our bearing and began their search. The wind was howling and the sun was setting. Sitting in the cockpit, trying to convince ourselves that we aren’t cold, we tracked every movement of the rescue crew. We discussed what might happen in the coming moments. Maybe they had saved their third flare for night time for better visibility of the flare and they’ll shoot it off now that the chopper is there. I honestly would’ve cried and was on the verge of crying just thinking about it. The helo followed the exact bearing we provided and hovered right where we saw the flares. When they left that spot, it was a huge let down. We watched them cover their search grid for a while, tracking the blinking red light across the horizon. 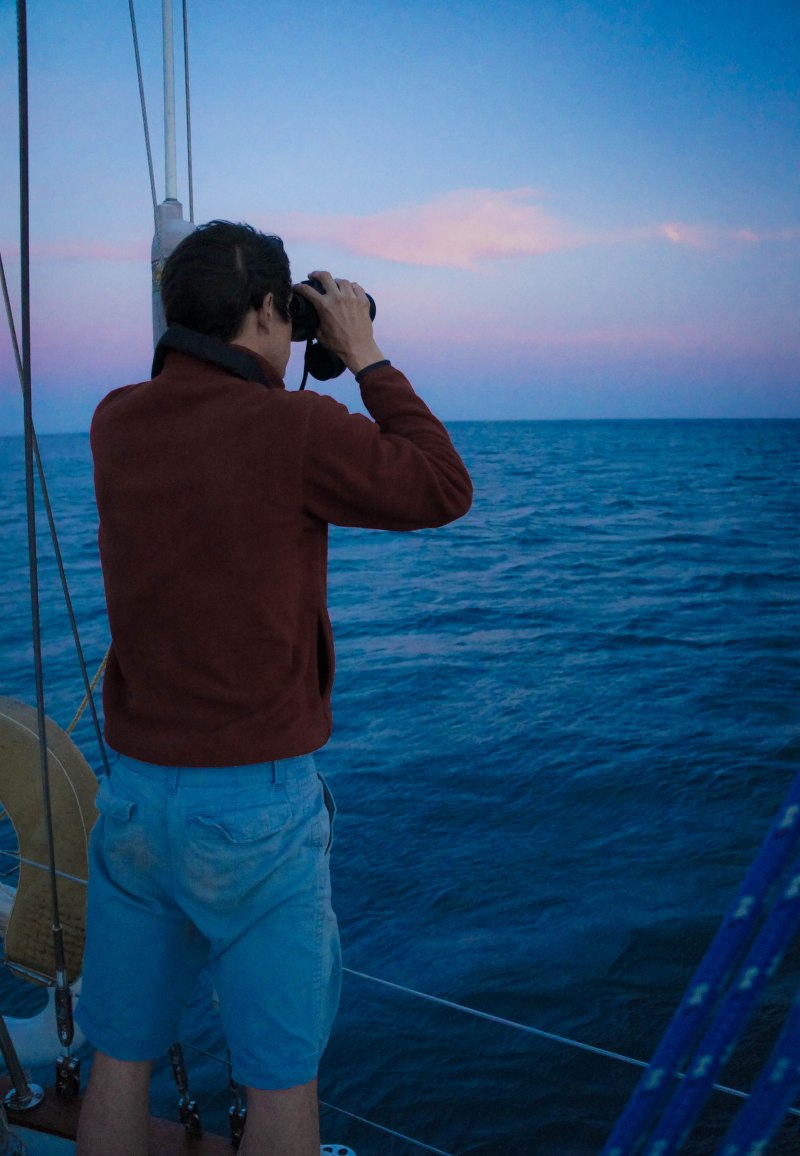 After a couple hours, our hope was dwindling. We retreated inside to make dinner, even though we didn’t really have an appetite. We found an oil spill (safflower) in the pantry that meant we had to take everything out, wash all the containers, wash the pantry walls and shelves, and put it all back. It was a shitty chore and we were exhausted and emotionally drained. But here we were, inside our boat, safe from the elements, tending to our food. Not much to complain about given the alternative within a few miles of us, eh?

The Coast Guard hailed us to check in and make sure they were looking where we saw the flares. They also asked us to continue monitoring channel 22a, to keep a lookout for any additional flares, and to let them know when we were headed to bed. Let me repeat that – the USCG wanted to know when I planned to go to bed. For the first time in probably 20 years my gut reaction to that question wasn’t “None of your business, I do what I want!”

During the entire ordeal, and even now, it’s difficult to not put myself in the place of the person shooting off the flares. Did anyone see it? Did they know what it was? Did they report it? Is anyone coming? Will they be able to find me? I also wonder what it feels like in the seat of the rescuer. That amount of pressure seems incredible. It’s their job to save lives by spotting people – a speck on the surface of ocean. At night.

As someone who bobs around on the surface of the ocean, it was comforting to see the response by the USCG, despite how hopeless it started to feel. It also served as a very serious reality check. Those flares were somehow spotted by people who were able to collect substantial location information and report it all to the Coast Guard in time for some daylight searching. It was a speedy response because everything happened that was supposed to happen after a flare is activated. We checked in with the Coast Guard in the morning and they were wrapping up their paperwork. The search had been completed with no signs of distress found. I hope that whoever shot those flares off didn’t watch that helo fly away. Alternatively, I hope that Craig and I had a joint hallucination and that there never were any flares and we just gave the USCG another training exercise. (I just want to make sure that no one thinks I am blaming the USCG for suspending their search… because I’m not.)

With all the recent calls we have made, I’m honestly concerned that the Coast Guard is tracking the calls submitted. (It’s Trump’s America and databases are trending right now.) I’m afraid they’re going to tell us we aren’t allowed to call them anymore – we have reached our quota. If anyone in the USCG is reading this, can we get a clean slate? While I’m not sure how many people are lost at sea every year, I’d like to avoid becoming part of that statistic.

That evening was a new kind of emotional rollercoaster. We thought we were helping to save a life and ended up assuming the worst about the fate of a fellow boater.

I should probably tell Mamita not to read this entry…

One thought on “One red flare”

"Shower days are the best days" and other surprising revelations