You know when you have a weird or funny experience and you just can’t wait to tell a certain person? This one person will truly understand the hilarity of the situation and appreciate your story telling. Sure, you’re excited to tell other folks, but some stories are just meant to be told to certain people. This story was meant for our friend Lisa. Craig and I decided that since we can’t tell her the story in person (because fuck cancer), we’ll document the story as we imagine it would go down. Please note, we know that Lisa would be much funnier, sassier, and inquisitive than we are able to document in our blog. We just couldn’t help but try to include her. We miss you, LEEEEEEEEEEEEEEsa!

L: (Handing over chilled microbrews and settling into Butterball.) So tell me about your trip you guyyyyyzzz!

C: (Hanging his head in shame.) I did not wet the bed!

K: (With a raised eyebrow.) Uhhhhhh….

C: I had a dream… that was really, really vivid… and I was peeing in the dream…

C: I didn’t do it on purpose. I didn’t wet the bed… I pissed myself. I just happened to be in the bed at the time.

L: I’m pretty sure that qualifies…

C: Well when I woke up, the first thought I had was “Oh shit I’m peeing in real life.” But I stopped right away, got out of bed, and finished peeing in the toilet.

K: That’s doesn’t mean that you didn’t wet the bed. But more importantly, he contained it. The pee never made it to my side of the bed. We DID have an extra sail for the day though since the sheet was drying on the rigging after Craig washed it.

L: (Heavy with sarcasm.) You didn’t wash it for him?

L: (Clearly smirking.) So does this happen to you frequently, Craig? Is there something you need to discuss with your doctor?

C: I did the math and I’m pretty sure that the last time was when I was 18. Exact same scenario. I blame the dreams for being too vivid. And in this instance, I blame the donut challenge from the day before. My body was not prepared for the fallout.

L: The fallout? Was there something else that happened? Did you also shit the bed?

K: If that were true, I’m not sure he would be willing to share that particular story…

C: Nooooo the bed remains poop free. But the whole day just felt like… I don’t even know if there is a word for it…

K: Shambles. The rest of the day felt like a shambles. Like a damn shit show! The whole goal for the day was to travel a measly 4 nautical miles and meet up with our friends in Rosario – a little resort on Orcas Island. The mansion and the property used to belong to a former Seattle mayor. There are showers, and a pool, and SHOWERS. Instead, we spent the day anchoring five-and-a-half times and still ended up right back where we started, in Eastsound. Without showers.

C: It was probably the most novice we have felt in a long time. We were doing everything right, but the conditions were just wrong.

L: I think I need more details. How do you anchor half a time?

C: Well, we got to Rosario just fine. By the time we got there, all of the mooring balls were taken though. The bay is not that big and it’s actually pretty deep. Too deep for anchoring in most of the bay. So we tried to anchor in the only spot that seemed to be shallow enough and have enough room between us, other boats, and the shore. As it turns out, there wasn’t a boat in that spot already for good reason. The seafloor was really rocky and both times we tried to set the anchor, it wouldn’t catch on anything and would just jump all over the place.

K: It was not a pleasant experience. The wind was kicked up and blowing us all over the place, and the anchor wouldn’t hold, and Craig had pissed himself – no not again, I just like to remind him. But at that point, we decided that we weren’t going to find a spot to anchor so we turned around and headed back to Eastsound, right where we started the day. Someone had already taken the spot that we had left that morning, but we set the anchor between them and another boat. Everything looked great.

L: Okay that’s only three times anchoring. How close do boats get when anchoring?

C: It sort of depends – there isn’t a solid answer for that. But an hour or so later, we came back on deck and noticed that we had gotten uncomfortably close to the boat that stole our spot.

K: We aren’t sure why, but we think the currents were squirrely and opposing the wind, and the other boat was on a line rode rather than a chain rode for the anchor. So our boats were reacting differently. Either way, we didn’t think it was a good idea to stay, and since we were the last ones there, it was our responsibility to leave. As we weighed anchor, I saw the owners of the other boat on the dinghy dock, I think they happened to come back and see how close we were and were relieved to see us moving.

C: The fourth time we set the anchor we had just moved a little southeast of the previous spot. The chart said that it was still a good bottom, still somewhat protected, and within the right depth range. Seemed like we could just reset it quickly and move on with our day. There were beers to be consumed! But as we reversed the boat to check the hold of the anchor, we never stopped moving.

K: I just realized that we are using a lot of boat terms. Do we need to recap anything in landlubber terms?

L: Hey! I know port from starboard! But what does it mean that you didn’t stop moving?

K: Hmmmmm, okay. When we set the anchor we drop it over the bow, and once we let out enough chain for it to reach the bottom, we start backing up and we keep letting out a bunch of chain. In theory it’s supposed to go in a line, but Small World can’t back up straight for shit. Let’s hope our lives never depend on that. Anyway, after we lay out enough chain, we put the boat in reverse and give a little more horsepower. This pulls tension on the chain and helps the anchor bury itself. Eventually the anchor will stop our backwards momentum and hold us in place.

L: So since you kept moving, your anchor wasn’t buried or holding you in place!

C: Exactly. So once again, we brought the stupid thing back on deck. Krystle was fed up and drove the boat over to Judd Bay where we had been a couple nights earlier.

K: It was a great little cove and there weren’t any boats in there that we could see. We picked a spot and started to drop the anchor. I started to reverse and suddenly Craig messed something up so the anchor chain got stuck.

C: (Throws shade at Krystle.) What reallllllly happened was that the chain within the chain locker below deck was all messed up and had effectively pinned itself so it couldn’t come up and out of the small hole in the deck.

K: This is the half anchoring. With only about 40 feet of chain out, we were just drifting and losing our spot in the middle of the bay. I didn’t want to end up too close to the shore, which was a rocky cliff, so I made Craig bring it all back up and start over for a total of five-and-a-half anchorings.

L: How many beers did you drink after that?

C: Funny you should ask! As soon as we confirmed that we weren’t dragging anchor, yet again, we jumped in the dinghy and marched our asses to a local brewery.

L: Awesome! So the day wasn’t a total loss?

K: Actually there were some really great parts to the day. The beer, the blackberries, the sunset, the GIANT jellyfish…

C: OHMYGOD THE JELLY!!! Lisa, this was the biggest jellyfish I have ever seen. We rowed Zubie over to check it out and it was incredible. I’m pretty sure it was a hundred years old.

K: I’m pretty sure you have no idea how old it was. But it was incredibly large. You wouldn’t be able to wrap your arms around it. Just the bell alone was probably about 3 feet in diameter.

C: I think the day turned out pretty well –

K: Even though you pissed yourself?

C: Yeah. We made a lot of good decisions about keeping the boat safe. It never felt like we were leaving the boat in a precarious situation. It felt like we were always on the same page – we were both uncomfortable when the anchor was dragging, we agreed that the boat should move to a safer spot, we knew that things weren’t right.

L: You guys have come a long way. Bravo! 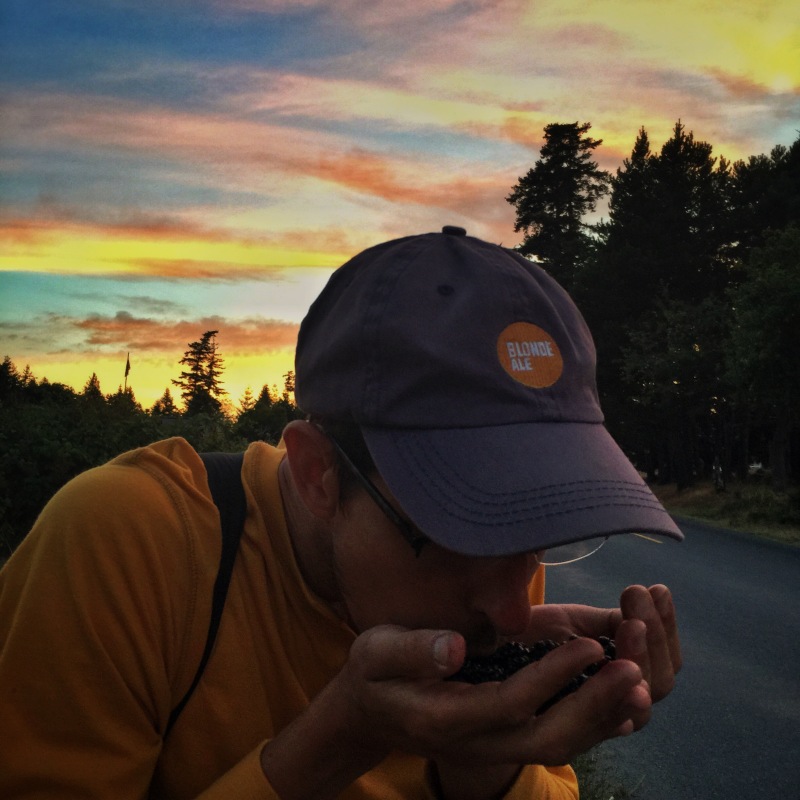