During our raft up in Reid Harbor, Jeff and Brenda wouldn’t stop talking about the Donut Lady at the Saturday Market in Eastsound on Orcas Island. On and on they went, raving about a dessert breakfast item. When we couldn’t take it anymore, we finally agreed to meet them there the following Saturday. We don’t even like donuts. But we made a pastry promise and McMasters and Hewitts always keep their pastry promises.

So on Thursday we weighed anchor in Echo Bay and headed for Orcas Island. We didn’t want to wake up early (duh) which meant we wouldn’t make it all the way to Eastsound. And really, it’s a good thing we left when we did because we got to drive right by a bull elephant seal! Procrastination has its perks, people.

Initially we thought Deer Harbor would be a great place to stop, but there wasn’t much room to anchor among the mooring balls. Since we’re pretty salty sailors, we just adjusted course on the fly and steered around Crane Island, through Wasp Pass, and toward Westsound. And since we were feeling extra salty, after anchoring in a quaint little cove behind Double Island, we even took showers. That’s right. A third shower! That’s three showers for each of us over twelve days. This time the water was even hot! What luxury!

Friday’s journey had to end in Eastsound in order to position us for the Saturday morning market Donut Extravaganza. It isn’t a huge distance to cover, but when you’re sailing, suddenly 13 miles turns into 26. I don’t actually know how many miles we covered over ground, but I do know that we tacked exactly 72 times while going north to Eastsound. I should take a moment to note that sailors tend to exaggerate. So in this case, we actually tacked about 12 times, but it felt like 72. You understand.

Another raft up was organized and I parked Small World perfectly. I Tokyo-drifted that bitch right up alongside SeaScape! Much to my dismay, the raft up was immediately disbanded so that the anchors could be reset to accommodate the anticipated wind shift. After a second perfect parking job, Craig and Jeff got into Zubie with the spare anchor to kedge it off the back of the raft up. Another nearby boat was not pleased with our location so Craig smiled, kept rowing, and kedged out the anchor anyway. It’s the most passive aggressive thing I’ve ever seen him do. He’s officially a Seattlite.

In reality, it was absolutely fine that the guy wasn’t pleased with our location. We all get concerned when we see other boats get close. These are our homes (or very expensive toys), and we’d rather not break them. Craig, Jeff, and John did explain to the guy that with our kedged out anchor, we wouldn’t be swinging and that the guy’s boat would have plenty of room to swing with wind and current.

Once we were finally rafted and kedged, the three of us headed to shore. We were out of provisions so eating on the boat wasn’t really an option. And we were starving. Slightly untrue…I’m pretty sure I’ve gained weight on this trip. Either way, we needed to get to shore to see Emmy’s friends from Camp Orkila and to pick up Lucas. That’s right, we convinced Lucas that he should drive all the way up from Seattle so that he too could try these allegedly beautiful donuts! Once he agreed, we asked if he would stop by the marina to pick up some mail for us. And for Jeff and Brenda. And since he’s such a great friend, he said yes. Lucas is the best!

So we had dinner and drinks at The Lower and listened to some surprisingly entertaining karaoke. I even added a new life goal to my list while watching a group of older ladies dancing to “Strokin.” I can only hope that I get to grow old and will still be out on a Friday night living it up with my friends. #GoldenGirls

Surprisingly, Lucas, Emmy, Craig, myself, and all of the mail fit into Zubie for the ride back to the boat. It also happened to be our first nighttime ride in our new dinghy. When Lucas said “I get it now. I get boating,” I happened to be feeling rather accomplished. This trip has been incredibly fun (duh, look at us) and a great boost to our confidence. Don’t worry though. During these wonderful raft-ups, Brenda has been telling us stories that make me wonder why we, or anyone for that matter, are doing any of this. So our egos are in check.

T-minus one sleep ‘til Donut Day. 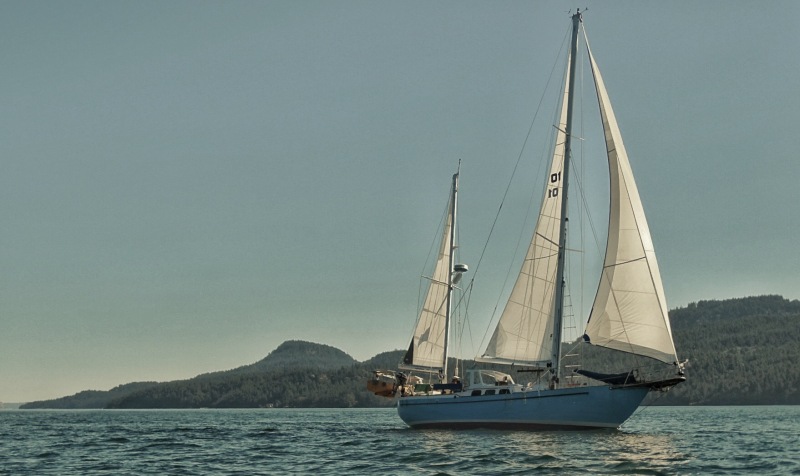 Thanks to Jeff for zooming out on his dinghy to grab some photos of us heading to meet the raft-up!

4 thoughts on “In Pursuit of the Beautiful Donut”