First things first (I’m the realest), there is something that you should know about me. I looooove sleep way too much. Crawling into bed is one of my favorite activities and the alarm clock is my arch nemesis. I still can’t figure out if the snooze button is an enemy or an ally. As a child, I missed all of the Saturday morning cartoons and would always hear the ol’ “Ohhh she’s alive!” bit when I had finally surfaced, which only made me crabbier and more reluctant to wake up. There was once a fire across the alley from my house and multiple fire trucks showed up. They were probably no more than 100ft from me. I only know they were there because someone told me in the morning. Who sleeps through fire truck sirens?? This girl.

I guess I shouldn’t have been surprised then, when Craig crawled into bed the other night (I’m a couple months late in posting this…) and there was a giant puddle on the blankets. On top of me. Once he told me, I considered letting the blanket stay there because I was too sleepy (and crabby) to want to do anything else. So I laid there for a bit. And as the drops continued to fall onto my puddle, I realized they were splashing my face. So not only did I sleep through the puddle creation, I slept through my face being in the splash zone. What is wrong with me?!

Craig went up and put the tarp over the hatch, put the blanket out by the heater and dehumidifier, and came back to bed. Luckily the comforter didn’t get soaked all the way through, so our other blanket and mattress were still dry. The main drip onto me had stopped, and the secondary drip onto Craig’s face also stopped. And we slept happily until that damn alarm went off. 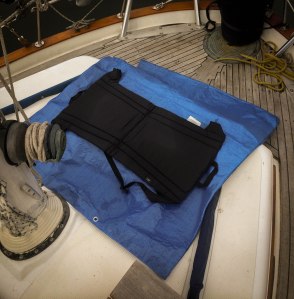 Craig’s version of rigging the tarp means laying it down with something slightly heavier on top. Thank Neptune the winds weren’t in full force!